Definitely tea and sympathy has been the order
of the day at our place over the past two weeks.

I've only just felt like sitting at the machine today and
sewing strips - nice and simple and not too much thinking!

Mardi Gras update, eight blocks so far with another
twenty eight to go!

I could go with nine full blocks set three by three, example of one
setting style above and
when all 36 are ready for playtime there'll be
some time spent arranging and re-arranging.

I could also go this way 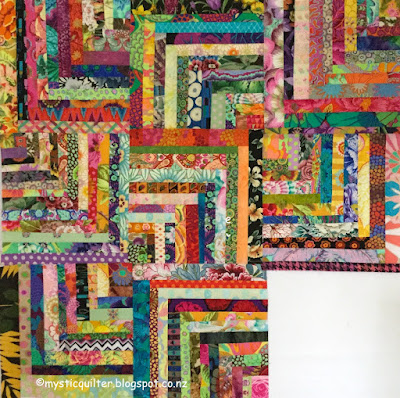 I'm sure I'll find a few different settings when the time comes.

We can't quite believe that within the course of two weeks or so
we had news that two dear friends and a cousin of
my husband had died.
The first we heard a friend in Germany had passed
peacefully in her sleep - younger than I am!
Then we had a call from Australia telling us that John's cousin
had died, again a good 10 yrs younger than me,
then an email from England with news of another long time
friend, known by me since I was
around 6 years old and as I'm now 70 that's a lot of years!

I'm now in a better frame of mind and quilting will
help, also I've been out for a few lemons off the tree,
lemon curd making tomorrow! 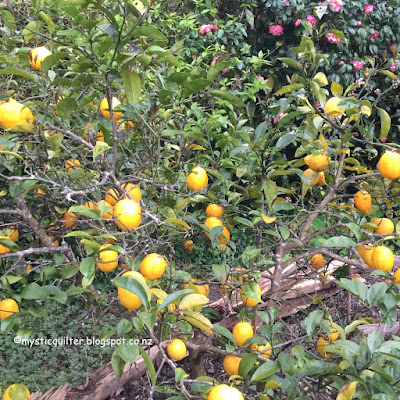 Hope that in the midst of all the turmoil in the
world at the moment you're still able to
enjoy quilting.

posted by Mystic Quilter at 4:09 PM

Lovely 1/4 log cabin blocks! Are they all Kaffe fabrics? If so, you have a huge stash! Hope your weekend is relaxing, mind you with the election on anything could happen!

Love the new blocks your are experimenting and playing with. You pick such great colors when you put things together! Glad they are helping soothe the sad news you have gotten lately. Simple sewing does that for me too. Hugs and prayers for a relaxing and refreshing weekend.

So sorry to hear of all those losses--it is difficult dealing with that for sure...
my condolences. I really like your Mardi Gras piece--it does definitely look like that celebration....glad you were able to sit and sew for a bit. hugs, Julierose

I'm sorry to hear you've had so much bad news all in one rush. I hope the quilting helps to raise your spirits; the blocks are lovely and so full of colour - they look good in both configurations.

Your Mardi Gras blocks are so pretty.

Making such beautiful fabric pieces is a statement that chaos does not reign. Every day is a gift and your art work is a double gift.

I'm glad your fabrics are bringing you some joy at such a difficult time. I love the richness of colors and the variety of prints in your blocks. It's a lovely reflection of all the beauty that good friends bring to our lives.

Sometimes our grief is so heavy we can't do anything. I'm glad you've reach the point of quilting again. It helped (and still helps) me work through grief.
Your housetop blocks are gorgeous. Some appear to overlay others in the second setting. I look forward to seeing the finished top.

Glad you are pulling through, Maureen. So sorry for all the loss.

It does sound like a tough time for you Maureen and good to hear that sewing some fabric helped soothe your soul...playing with layouts and settings will be a good distraction. PS Cute houses from your previous post..I have some unfinshed house blocks deep in a drawer somewhere too!

Here's wishing you well and that the hum of your machine will help soothe your saddened soul.

So sorry to hear about your losses. I think these things come in cycles and we have to be strong when it happens. Loving your Mardi Gras blocks. I think it's a great way to work through your sad news.

I'm sorry for your losses.
Your blocks are lovely, great work.

What a rough couple of weeks, so important to make the most of every day. Enjoy your lemon curd making!!

You've really had a rough time of it for a while now. Hopefully some lemon curd (mmm...) and those gorgeous blocks will help!

Maureen, I'm so sorry for your losses. You have my deepest condolences.

So sorry about the loss of friends and family. Hopefully making all those bright blocks reminds you of all the happy times you spent with all.

Gee, Maureen, I just experienced something similar and it really got me down. From here on in, I guess this will be how it is, sadly. I am sorry for you and am glad the quilting helps. I don't know what I'd do without my needlework and quilting.

So sorry to hear of all your sad news, Maureen. A lot to deal with in a short time, more difficult when you are so far away. Definitely quilting helps. I've found it a marvellous therapy over the years.

I love the embedded boxes. And you certainly have an incredible haul of lemons.

Hope things are levelling off and you are managing to come to terms with all your sadness. It is so hard to do normal things when you feel down. So many tragic happenings in the world.
My family should have arrived last night, from Germany, and their flight was cancelled after many hours delay. I was feeling low after a funeral yesterday and that finished me off. Then I felt guilty as I realised all the good things in my life. My family is safe and had a home to return to and we can see them another time. No hurricane damage for them as so many others have suffered, so I am doing my best to keep my chin up. Must confess that I miss the children and they were really upset.
Keep smiling and keep stitching.
Love Jo

Look what I found when I finally got around to reading posts...one from you. I am sorry about the deaths..sorry about the sadness and sorry about the sorriness in this life of ours...Just two and a half months till I am 70 OMG I am freaking out since my dear man died at 70. Breathing...Glad you are sewing. I am cleaning and drinking wine...thinking of you xoxo

I think quilting is a soothing hobby when things are out of our control. I turn to it when I'm having days where i just can't handle the news.... on tv or personality. I've taken my handwork with me many times to sit by my family members that were in the hospital.
I hope yours helps you through this sadness. {hugs}