We've had a lot going on around here so time at
my sewing machine has been almost non-existent,
however, I have made four more blocks today for my
Mardi Gras quilt.

I have a couple of tubs of scraps by the side of my machine,
chunks, clean up cuts, plain old left-overs from lots of quilts and 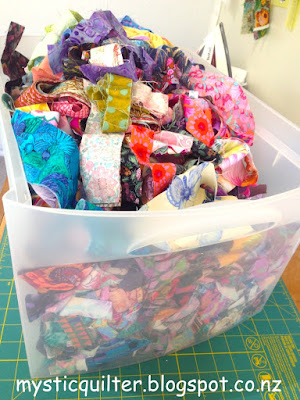 I'm just digging in and going with what comes out, 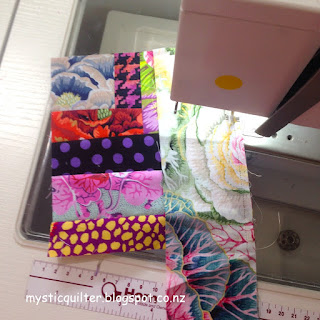 this strip was too wide but I just sew and cut to length,
press, then use my ruler to trim to the width
I want. 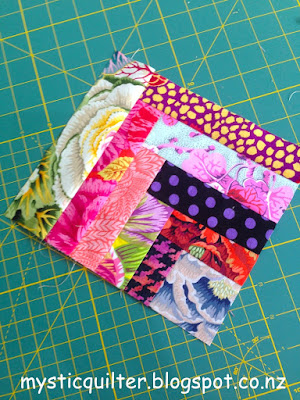 After setting myself the target of making four blocks this afternoon
I now have 12 blocks, just another 24 to go! Blocks are 12" finished
and it goes without saying that most of these scraps are
my favourite bright and bold KF Collective fabrics, with a few
other additions from over the years. 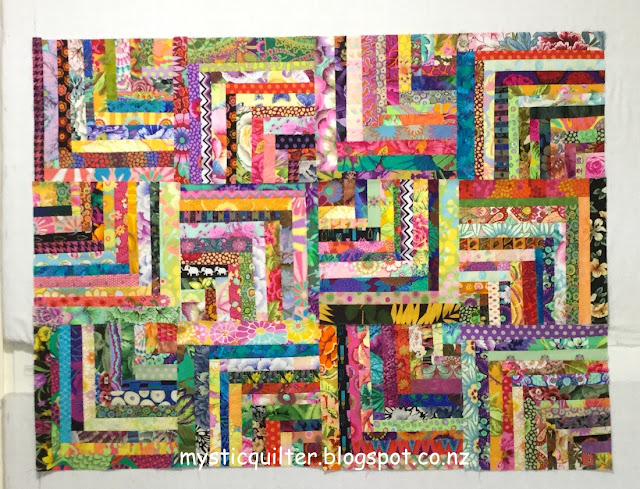 Still playing around with possible arrangements but had a break because
of this distraction arriving on our doorstep this morning, 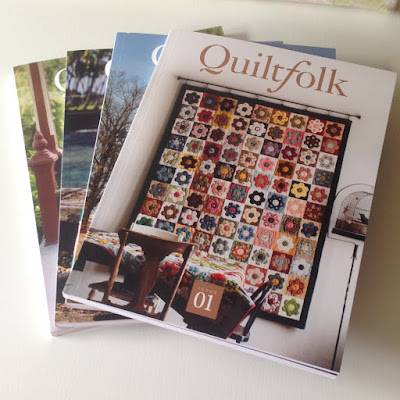 four Quiltfolk magazines - I thought about this magazine when it first became available
but the cost had me hesitating,  decided to go for it last week and
when I checked on the subscription costs found they were also
offering the first four issues at half price - too good an offer to pass up.

Before linking for Sew,Stitch,Snap,SHARE   two
rose photos.
A "Peace" rose opened for a few days and saved from the rain 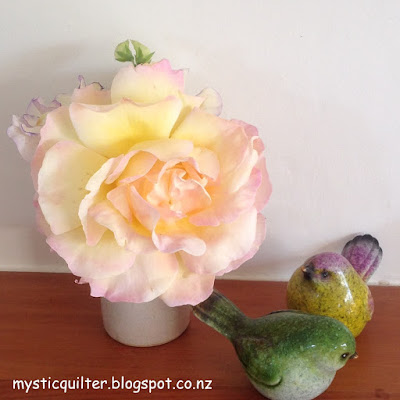 and another photo from two days ago 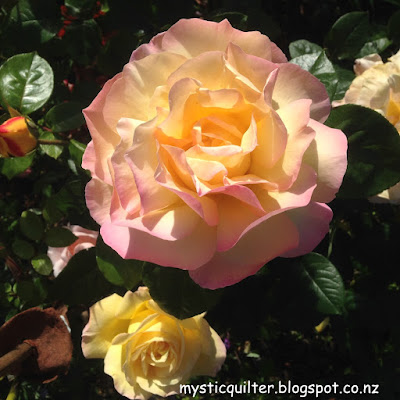 That's it from me, hope you'll go and visit
Linda at Kokaquilts
and
Julie at Justjulielou
for
week 17 of Sew,Stitch,Snap.SHARE
see you soon.

Hooray, I'm actually getting a post up on time to join the link
with
Linda and Julie
and this time I'm using up leftovers from Chinese Coins
shown below 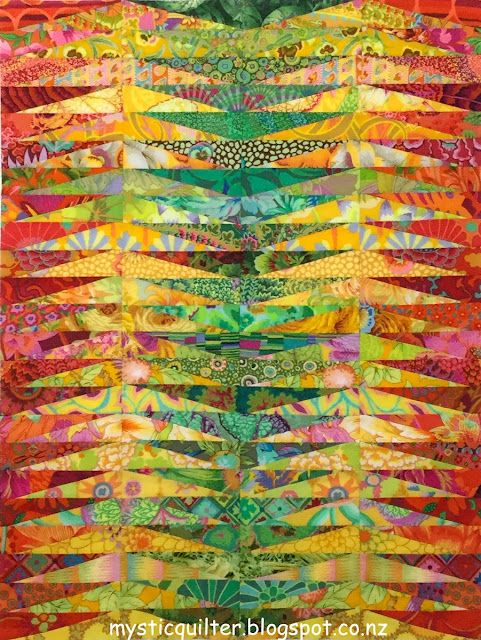 so with lots of strips 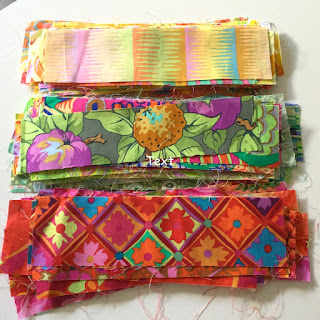 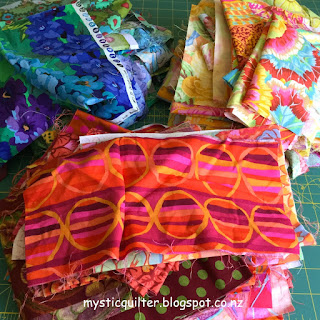 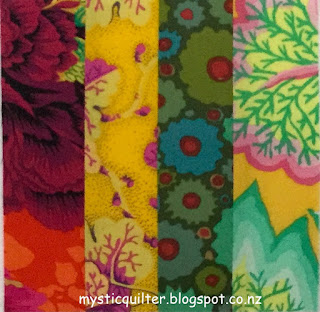 these will be 6" square when sewn together, I really should
have liked 8" finished but some of my strips were not quite long enough.
It's not the best time of day to take photos, too late in the afternoon
and the light is going, the colour is much brighter than shown here.
Chinese Coins gives an idea of the true colours.
By the way these are all Kaffe Fassett Collective fabrics.

I'm hoping to spend some time making lists tomorrow -
projects I would like to sew top of the list.
Two I have in mind need quite a bit of concentration,  these will sit
and wait for a couple of weeks.

Enjoy the rest of your week and don't forget the
link with Julie and Linda at the top of this post.

Teapots and a 5"square swap - a productive day!

Julie at justjulielou suggested that she and I have a swap of 5" squares,
she would send me Anna Maria Horner in exchange for
Kaffe Fassett Collective fabrics 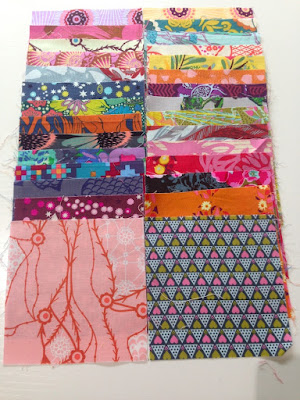 and just look at the lovely selection she sent.
I have only a handful of AMH fabrics in my stash
but I've cut 5" squares (below) from those to add to the swap
from Julie, along with more from different designers. 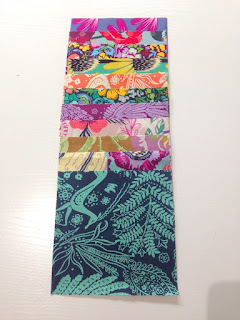 I'm thinking of a throw size quilt and luckily I have
a few Amy Butler, Heather Ross, Victoria Findlay Wolfe
plus other designers to add to the mix.

I'm cutting 2" squares from my Jinny Beyer fabrics, these
will be going into the quilt. 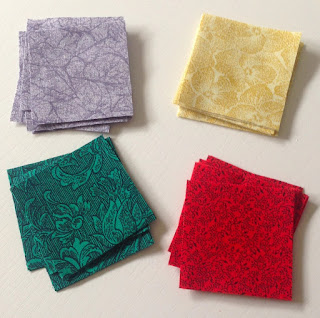 Remember my KF teapots??
Three for the second row now all appliqued, two
more rows to go and then a hunt for the perfect sashing and border.

I've also found a few quiet minutes to wander in the garden, lots of roses beginning
to bloom, I was surrounded by the scent from all these
old roses. 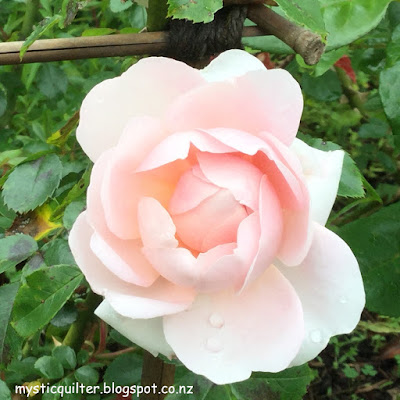 Another favourite are my Rugosas,
below is the bud of Rugosa 'Alba' 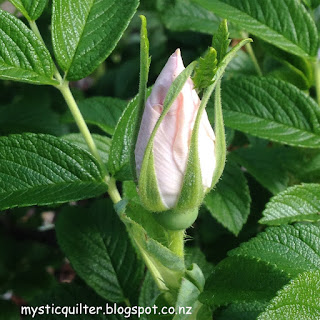 here she is below fully open, a single Rugosa. 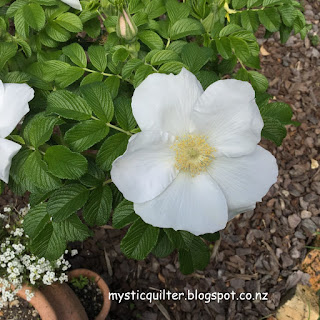 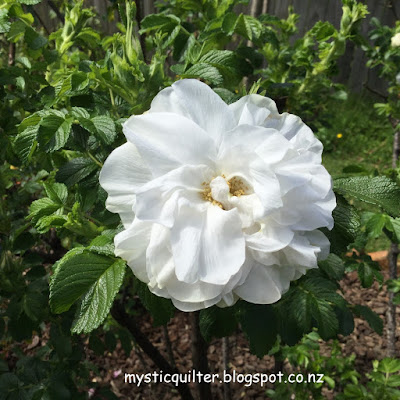 with her glorious perfume. Open the garden gate into
the back garden and you're in heaven!!
These roses are very, very hardy - no wonder because they
have the most lethal prickles I've ever seen, even Leila
doesn't try to chew these stems!