My last post  HERE I had the centre portion of Liquorice Allsorts -  let's just shorten to LA - sewn up.
The earlier post HERE showed two photos of the original quilt and also one made
by Kaffe Fassett.

For those who thought the dark squares were black, not so,  here's a close up  before
I go further of the Orchid colour way, the base colour is black the dotty patterning
is purple but admittedly difficult to see. 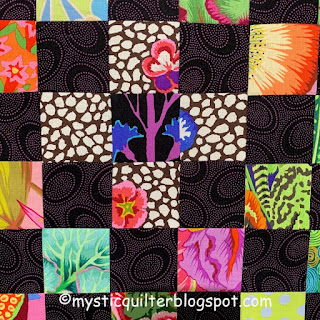 As usual I veered off course a little and progress made is below, you can see I added
another thin border of Aboriginal Dot in Orchid to the Guinea Flower strip and then moved on to
the rectangular pieces 8 and 1/2" by 2 and 1/2"cut from scraps. When I came to a corner and
the fabric piece was too long I just lopped it off, turned the corner with another piece, see the photo below. 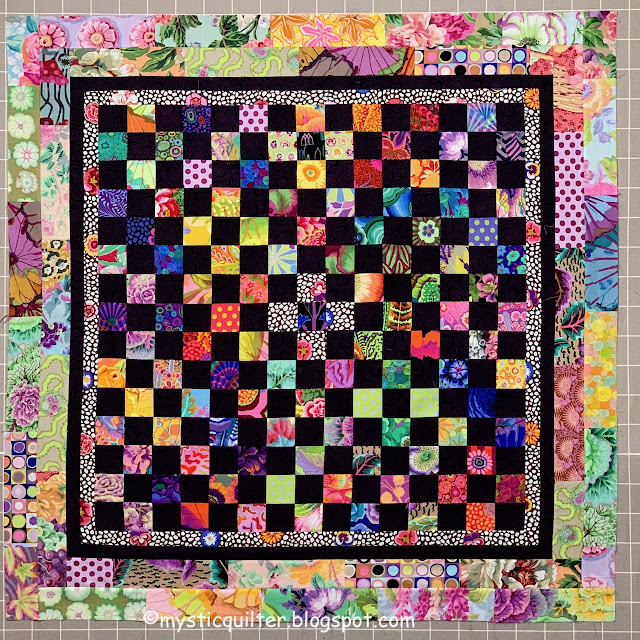 I wanted to go with lighter fabrics - lighter for me anyways, and just two rounds.
Had I kept with the original pattern I would have been adding many more
rounds and ending up with a 74" square piece. Didn't want to go down that path, so stopped
with the two rounds and then added two more border strips
but reversing the placement of Guinea Flower and Orchid, see below. 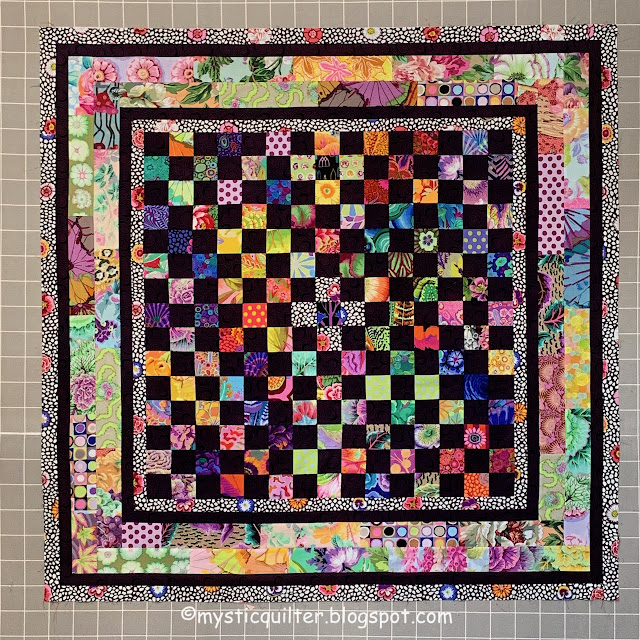 Here I stopped to ponder my next move, should I just add a couple more
rounds and repeat the whole process, should I just add a wide border, should
I bring in one of the fabrics used in the rectangles - answer was a no for me.
LA was telling me to stop faffing around and follow my instincts, I loved it and
the main focus for me was the central block of squares, so 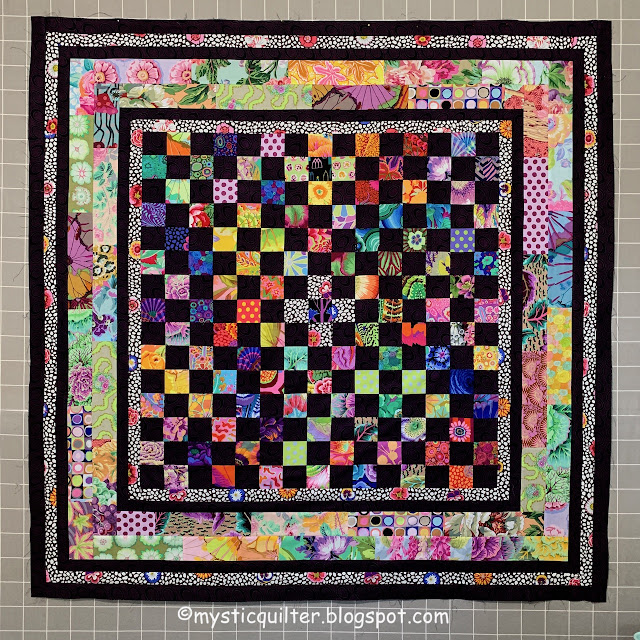 Here's a quick photo in the garden 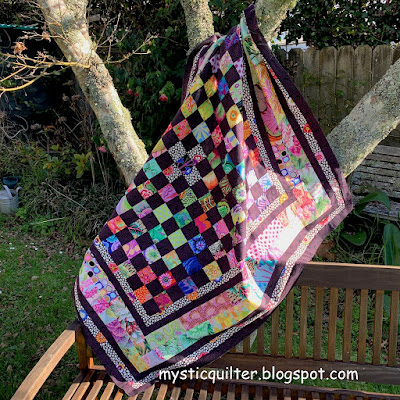 excuse the weeds in the background!

Tomorrow is set aside for dealing with the backing for the quilt for eldest son,
as I am currently being dosed daily with 40mg of steroids my mind is racing
and I am really having to try and slow down when sewing.
Reduction to 20mg tomorrow - hooray!!

A purchase made last week was this Anna Maria Horner fabric

to be used in a column strip quilt, should cut up beautifully into wide strips, adding this to
my squirrel collection!

Time for dinner - see you soon.

My last post HERE was focused on the start of a new quilt,
Stamps and Bricks.
I showed a few early 9 patch blocks - bright blocks!

As I placed more and more pieces up on the wall I became more and more
excited, this quilt just called out to be named 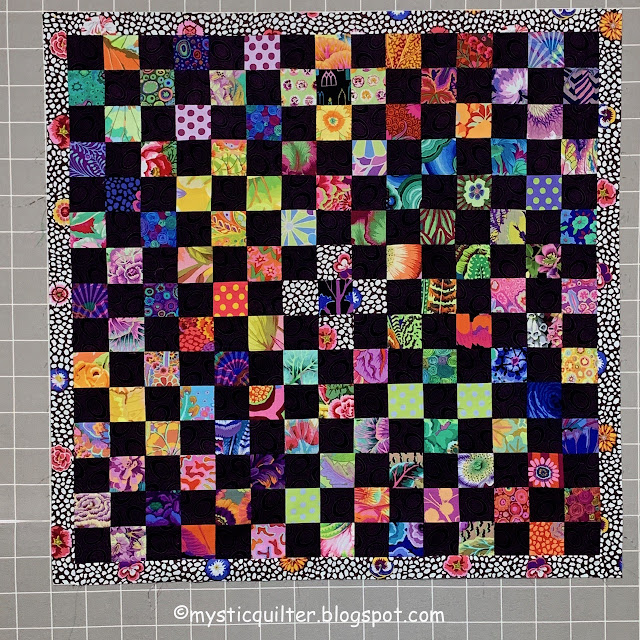 those of you who grew up in the UK or are still living there will surely know
how popular these sweets were, especially as children, and I think every
sweet shop in the country had them on the shelves.

For those who are not familiar with Allsorts they were, as the name suggests,
based on liquorice and were brightly coloured. They were definitely a favourite
of mine.

A number of years ago just on Christmas I spied tin boxes of these delights
on a shelf in the supermarket, one just had to come home with me 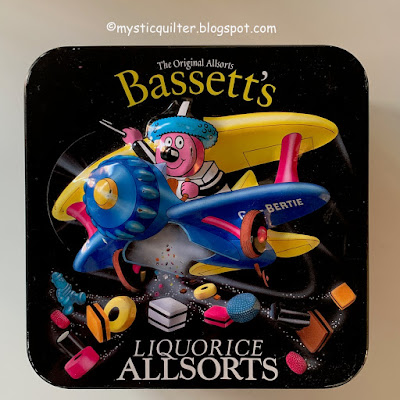 You can see the bright colours of the sweets, there was more selection than
shown on the tin.

Back to quilts - the centre block is 32" square presently, because of all the colour
I decided to go with a narrow border break - what else could I use but
Kaffe Fassett Guinea Flower in White, this echoes the 9 patch directly in the centre.

Aboriginal Dot in Orchid is used for the alternating squares,
it looks black in the photo but in reality is more purple/aubergine.

The only other patchwork related happening was pulling out my
spare parts box, this post from quiltdivajulie inspired me, but I had one
heck of a shock at the amount tucked in there. I pulled out
two Churn Dash bocks which I had made many years ago
when I was just discovering KF fabric, at least in the left block. 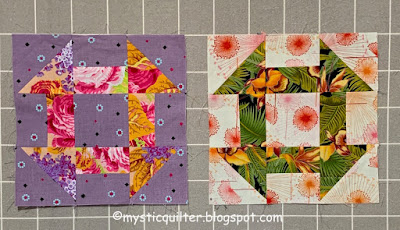 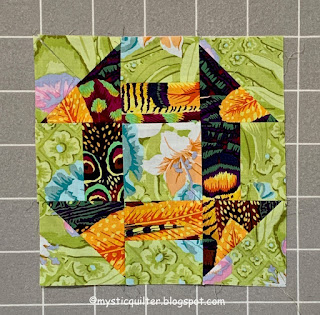 but don't let the photo above fool you, for some un-known reason
I had done this 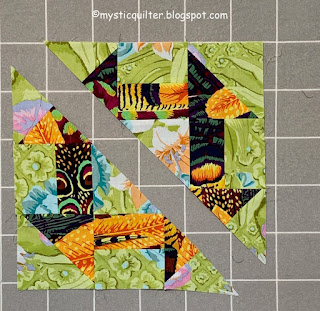 yes, what I pulled out was two halves!!
I truly do not remember doing this at all.
I promptly closed the box in case there were any more halves lurking there.
On a positive note my love of the Churn Dash block has been
re-kindled so watch out for a visit from the squirrel.
That's enough from me right now, closing with one of the beautiful
camellias flowering in the garden 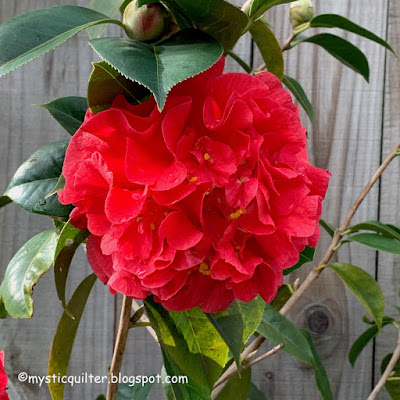 Have a happy weekend, see you next week.
Maureen