Back at the machine!!

After a difficult three weeks I finally feel I'm coming out of the fog
and ready for some action - simple action was the order of the day
yesterday. 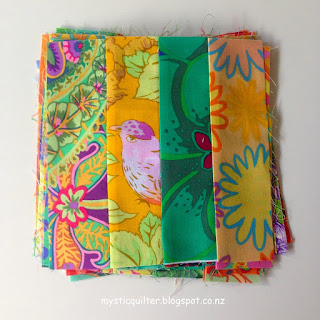 First up a few more strip sets for
Freshly Squeezed - nice and easy.

Next in line using up a stack of left over batik strips,
I've seen many quilts using this simple block and decided to
make a start, so quick and easy. 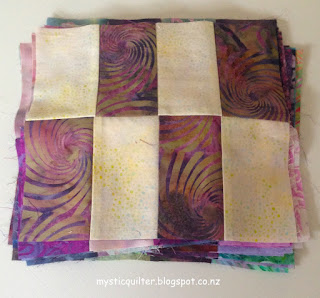 Below I have just a few blocks thrown willy nilly
up on the wall, not even trimmed yet, I have heaps to make so I'm
going to wait until I have enough for a decent size quilt. and
then start the time consuming part of placing in a pleasing
arrangement. 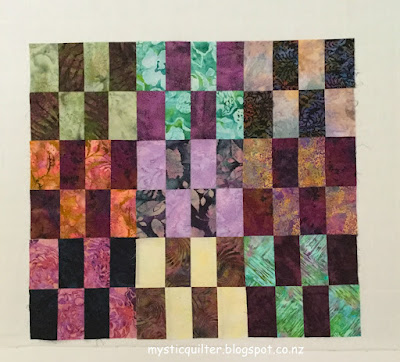 There were a few inches of the strip sets left over at the end
so trying to be more organized I'm cutting
these into 2 and 1/2" wide strips, they can go in my parts box. 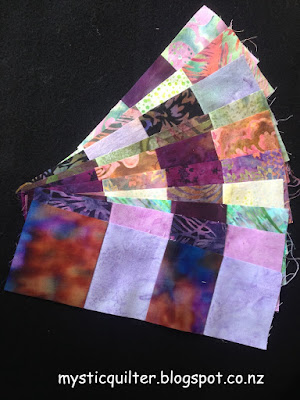 I like the look of these on a black background, I found an old piece
of black felt and covered a padded board to photograph individual
blocks and bits and pieces. 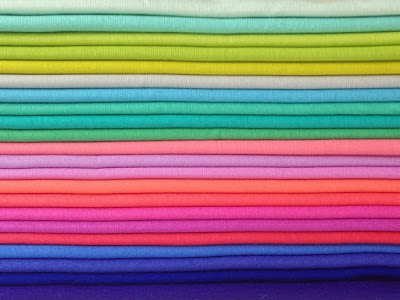 and I just love the saturated colour  of these fabrics, in fact
I was so thrilled I promptly ordered more and given
the news from Free Spirit I'm pleased I did
as I read and heard that once these stocks are gone thats it,
until the dust settles. Reading a few lines today it seems that
the designers may have found a "new home".

I had notification that the Tula All Stars fabrics were in so
these should be on the way to me tomorrow.
It seems to be a case of "feast or famine" as the new range
from KF Collective may be released in March and
having seen a preview of these I am in
seventh heaven.

After this binge fest of fabrics I shall be very strong and
resist further buying!!

Due to my missing three weeks my poor garden has suffered somewhat,
weeds galore due to the heat and humidity and then pouring
rain.
A walk around this morning though found  two of my favourites were
flowering to cheer me, 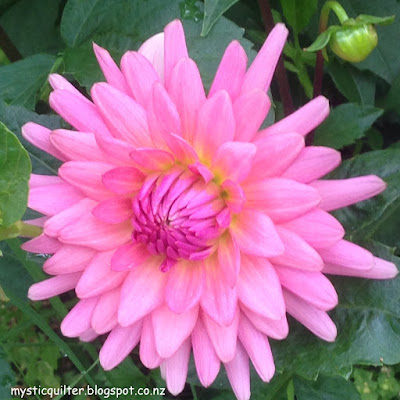 a lovely dahlia given to me by a neighbour all of
32 years ago
and below my spiky bromeliad, touch the leaves at your peril!! 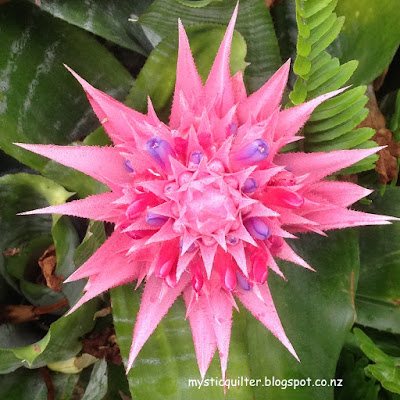 I think I have my colour mojo back now, so until next time
happy quilting!

I'm overdue with my thoughts on the lecture by Kaffe Fassett late January,
it goes without saying that as a KF Collective fabric fan
I enjoyed myself immensely.

I'm guessingt there's going to be quite a lot of his
fans out there who have read his autobiography
Dreaming in Colour
and therefore will know of his background.
He covered this briefly during his lecture.

First up on the stage was Brandon Mably - what a character he is!
He told us a little about Kaffe, also that he would be
speaking for around one hour, then 30 minutes taking question followed by
book signing in the foyer.

On to Kaffe, what a wonderfully entertaining speaker!
Plenty of laughs and stories added to his thoughts on colour,
his early days painting, knitting and then on to patchwork.
He seemed to have energy to burn and it was difficult to believe
that he is now 80 years old.

A few points of interest:

When he began designing his own fabrics he had many comments
that quilters found his designs to large and was constantly
asked what should they do with them, just cut them up was his response.

On colour - saturated is what he does - he does not do beige!!!
That was made pretty clear to us all.

He doesn't intend for quilters to slavishly follow to the letter
his quilt designs and colours used - make it your own,
change a few things, that's OK.

When making your quilts don't get too analytical,
get the pieces up on the design wall asap, go from there. He feels it
is very easy to over analyse the colour and design and not to go with the flow.
He made the point that in his workshops this is the approach
he takes, and he stressed that he and Brandon worked the
students hard!!

He showed slides of a few of his fabrics, his sources of inspiration,
and a few from his photo shoot in Ireland for his latest book,
very interesting indeed.

He actually spoke for around 90 minutes and the time passed
by in a flash, pity the seats were a little on the hard side!
If you find you have the chance to hear him speak, do take it! 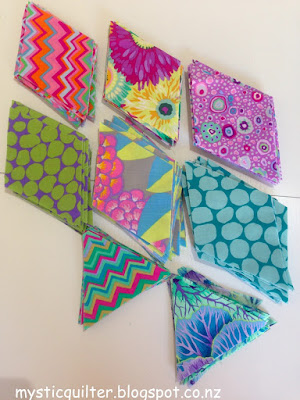 On Tuesday I began cutting diamonds for his Green Diamond quilt and I
was improvising as I didn't have a sturdy acrylic 60 degree diamond template,
the above was as far I went. There was a lot of starching, folding, matching etc. which
didn't do a heck of a lot for my worn out spine.
There are 475 diamonds plus triangles!
Next step was a 'phone call to a local shop to get myself an Accuquilt
die - waiting for delivery right now.

That evening sitting watching a TV programme, I suddenly felt my
left arm become tremendously heavy and fall onto the chair arm,
immediate thought was a stroke, but then the other one gave up on me and
I found myself yelling to my husband that I could no longer feel
nor move my arms, they were just paralysed.
To say I was frightened is a huge understatement but after a minute or two
they came right. The problem is in my neck, so after a thorough check with
the Doctor an urgent referral was emailed to the hospital and id if this
happens again it's an ambulance call and a ride to emergency - please keep fingers and
toes crossed that this is not going to be a serious issue for me. 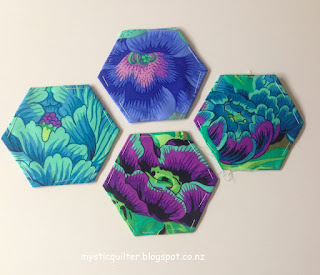 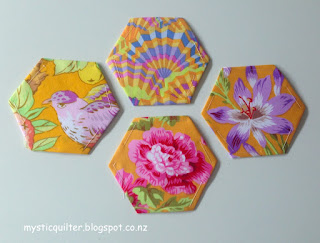 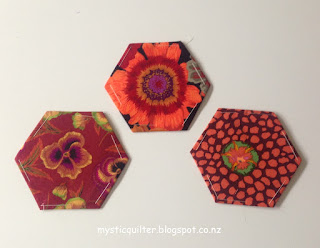 and that's it from me as my hands are packing up so
reading blog posts will have to wait until tomorrow morning.

First up my finish for January as part of 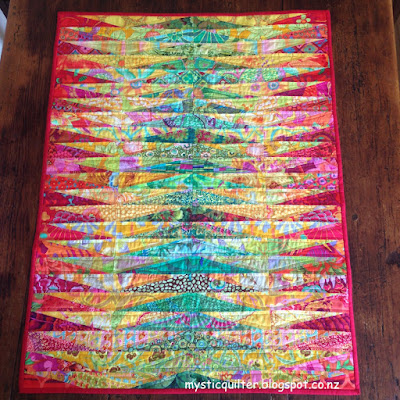 another photo with my all time favourite
bowl, just the perfect shade of jade green. 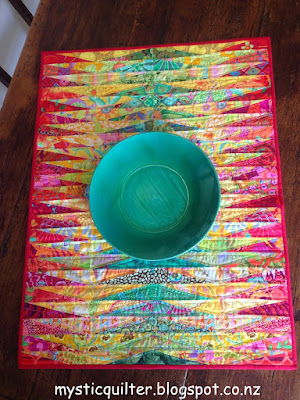 Each elongated triangle was quilted individually which made for
a lot of swishing the quilt around!

After finishing CC yesterday I moved on to a totally unrelated
project, hopefully as part of the next AHIQ invitational.
Some of you may remember this from quite some time back! 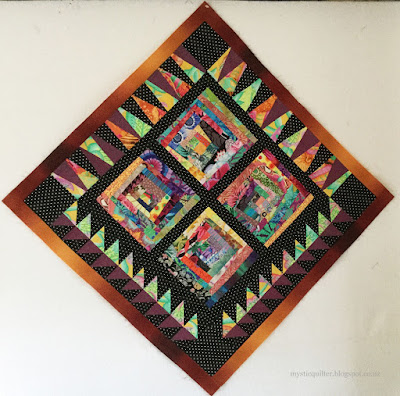 Corner triangles were planned but
I wasn't happy enough with it to carry on, into the unfinished
drawer it went.
Yesterday I fished it out and did a little unpicking 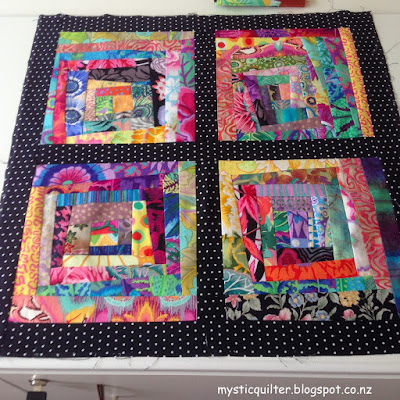 and I have an idea for using this central piece which I love.

Due to my mishap with the machine needle and other happenings
I've had a pretty slow two weeks and desperately need to get some
order into my quilting life - after all my word for the year is
BALANCE
so I should put it into action.
I've set a few days aside to do this and I am behind with
writing down my thoughts on the Kaffe Fassett lecture,
that will be done for my next post - definitely!!

To end this post I must show you  photograph of a decayed stem
and flowers from my orchid, I love the beauty to still be found at
this stage 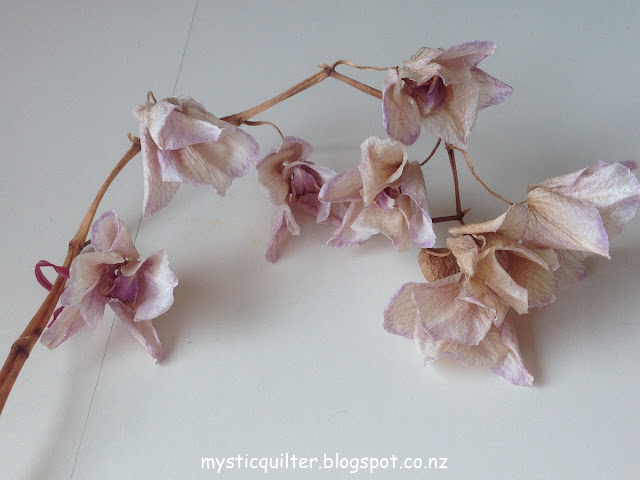 just look at those soft pastel colours!! A quiet quilt in the making perhaps.

Happy quilting and do visit
What a Hoot Quilts for 18 in 2018
for lots of January finshes.