A quilt in remembrance

I can't believe it's two weeks since my last post, it's been a very sad time
for New Zealand.
Perhaps you will have seen on your news, wherever you live, the
horror of the massacre of people in their places of worship.
There is a lot I should like to say but this is not the platform to do so.
I will concentrate on quilt related matters.

Here is my latest quilt, just a top at the moment, 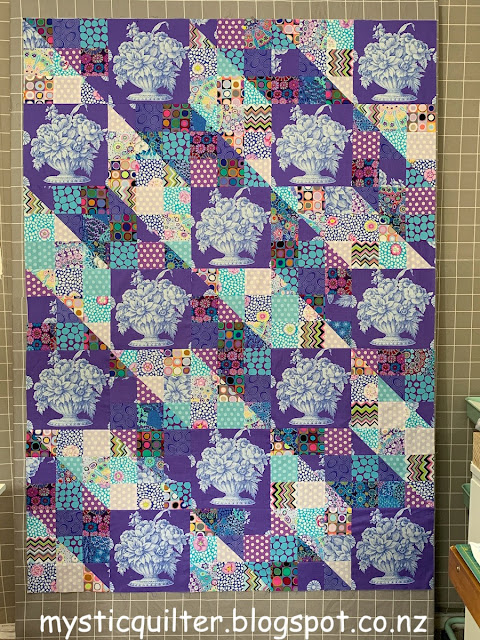 and you may remember  that this was a pattern from Free Spirit website
using Kaffe Fassett fabrics. There is no input in this from myself
apart from the cutting and stitching using the exact same fabrics given
in the pattern.

It was my intention to have this in a small
joint exhibition between myself and my husband, plans changed over the last two
weeks.

I found great solace in slowly working on this piece since the
massacre in Christchurch, 15 minutes each time at the machine
was the only way I could finish
due to a torn meniscus in my right knee.

Stone Flower Patches is staying with me now.

An exhibition of quilts can take place in the future.

Do you know, I haven't even been reading blog posts,
can't quite believe that myself, I shall be
catching up on reading tomorrow.

More from me in a few days, until then happy stitching
and enjoy the sunrise below taken one morning a week ago,
a 'heart lifter'. 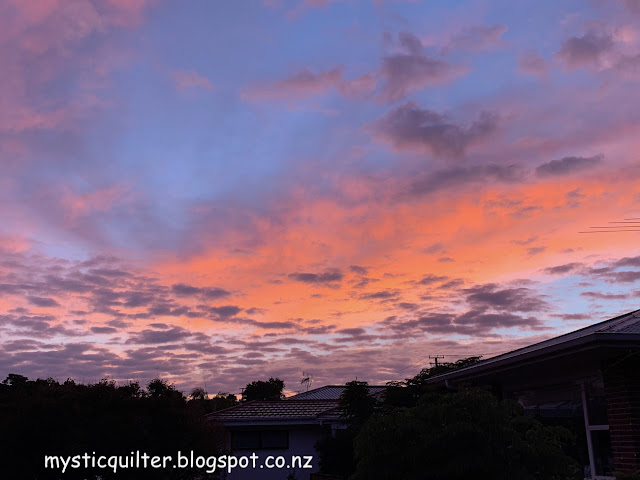 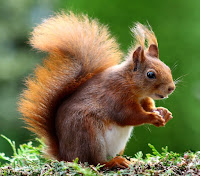 I have another squirrel arrive in my studio!
Still slowly working on Red is a Neutral and UandUQAL
but an unexpected quilt is in progress.

I'd forgotten  a commitment made some time ago to put a couple of quilts,
and possibly cushions, in a small joint exhibition with my husband,
he's a painter, beginning 1st May.

So, new Kaffe Collective fabric arrived, free pattern
from Free Spirit on their web site, this would be a good size to hang at
45" x 63"
as the display wall is not huge. 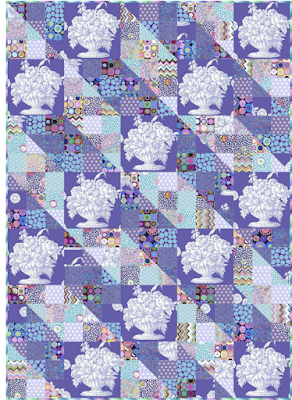 Luckily I had some of the required fabrics in my stash
and the remainder came from my order.
I fell for the Stoneflower pattern and had ordered
yardage in all the colourways.

This is Lavender Stoneflower and below is the true colour, the photo
above shows possibly a little bluer. Twelve 9 and 1/2" pieces all fussy cut. 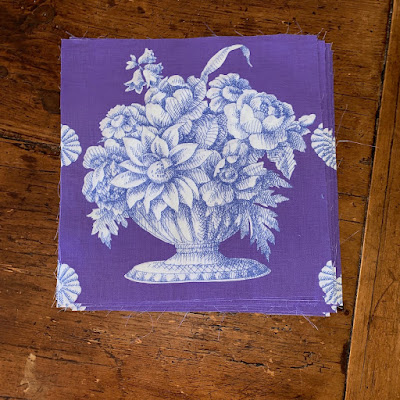 Small squares cut in both light and dark - black cat once more
deciding to try and snuggle up to the fabrics. 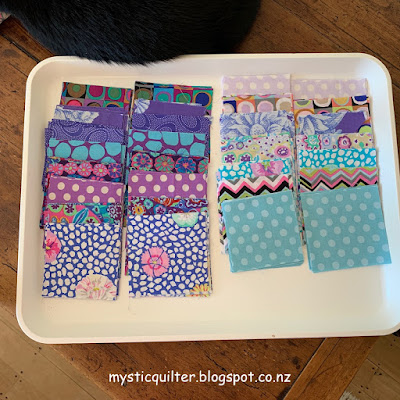 I couldn't resist sewing two blocks up rather than waiting until
all the hsts and squares were together. 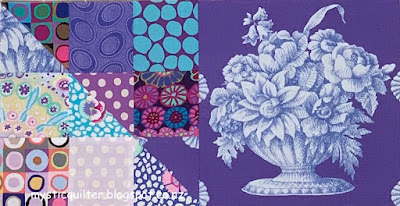 I'm mighty happy with the look of this and hoping it doesn't sell
in the exhibition! You notice in this picture the Lavender once again
shows slightly darker.

Whilst I was cutting fabric my package of the new
Anna Maria Horner range arrived and I love it! 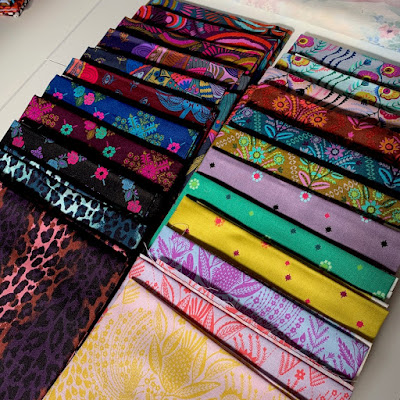 I have plans for this later in the year.
Quite different from my favourite KF but it's always good to step outside
our comfort zone now and again.

Now I don't use much brown in my quilts but in a blog post
from
Linda at kokaquilts
she asked was there a colour that we don't buy and/or
don't use, I replied mine was brown, but see what I bought, the AMH fabric below! 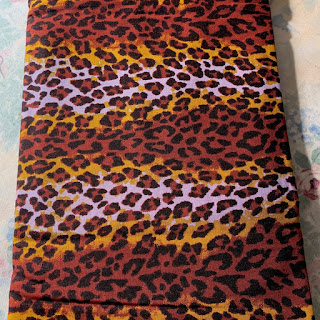 Had it been an out and out brown it would have been a no-no for me.

There we have the sum of my quilting activity since my last post,
pain is doing me no favours presently so I'm taking things slowly.
A wander around the garden showed the effects of
Autumn being upon us but the storm lillies are flowering, 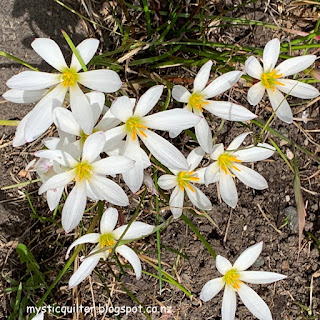 tiny wee flowers only about four inches high but always good to
see them at this time of the year.

Happy Quilting until next time.

Yes, officially the 1st of March is the start of our Autumn
down here in New Zealand, the leaves of the
Japanese Maple are already showing their colour a little 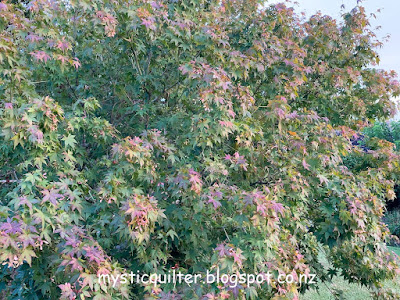 and the hydrangeas, once richly pink and blue, have
now begun their journey down the road into the antique colours 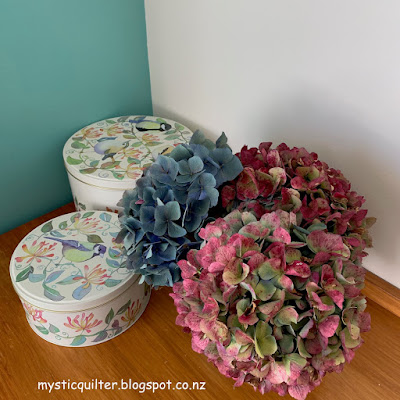 and still as beautiful as ever!

All things quilting - not a lot actually, I've been down
with an infection which stopped progress.
The sum of my achievements covers five more blocks for
the
Red is a Neutral
invitational with
AdHoc Improvisational Quilters

I intend to sash these blocks to negate stress on the eyes!!
A fabric has been chosen but I need more than the small amount
on hand, another order should be here within the week.
I do quite like them just as they are but when I have 20 blocks
measuring 14" the effect could be pretty overpowering.

Found my unfinished piece
with the name
Playtime 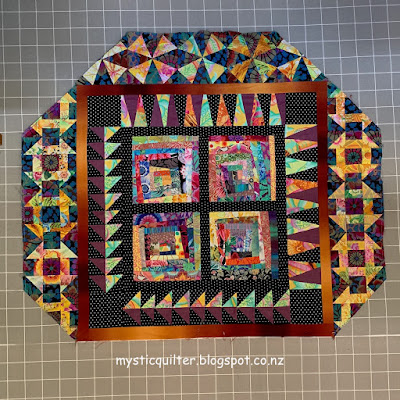 As I only have four more small kaleidoscope blocks
to add, along with four corners, it would probably
only take a morning to finish, better get on to it!

By the way, all the photos will enlarge if you give
them a click.

Oh, of course the Kaffe Fassett Collective have a new fabric collection
out now, needless to say I spent some time ordering!
One package arrived yesterday - yummy colours - doesn't have the tip of her left ear missing, she just
moved her head as I was taking the photo. After
sitting quietly watching proceedings she took matters into
her own paws to check out the fabric 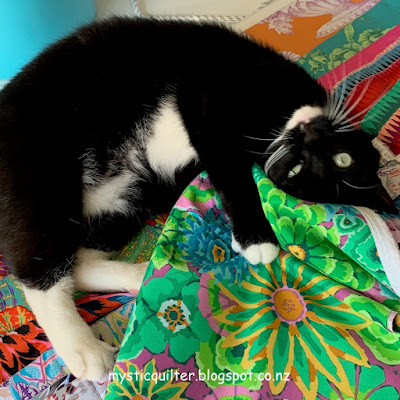 and  was swiftly ejected from the cutting table.
She is an ardent KF fan.

Another non-quilting job was a trip down memory lane.
John's Mum had given me a box of buttons as we left England
in 1980, these were gathered by her grandmother, her mother and
mother-in-law over the years. They came from items of clothing dating
back to the late 1800's  and she could tell me, for example, that the horn buttons
came from a coat made for my husband as a child,
buttons from dresses worn by her grandmother - you
get the picture.
My children used to have great fun visiting their Gran
who would let them rummage through the box.

I thought this one here was very special and very old,
measures almost 1/2" with 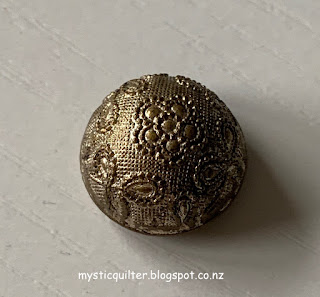 Well, after sending you all to sleep with multiple
photos and not much progress I shall head off to
the cutting table.

See you soon, have a happy weekend.