Another day of aftershocks in New Zealand

I have a photo of my Tula Pink star quilt to post
but yesterday was spent in front of a screen, TV primarily.
The South Island is once more suffering
from earthquakes. These have been felt also in the North Island.
Over 800 aftershocks reported.
Kaikoura, on the East Coast, is a scene of absolute devastation.
The town is completely cut off. Roads unusable, railway lines gone,
horrific land slips. No power, no water, no sewerage. People seeing their homes destroyed.
The only way in
was by helicopter but I believe now that they will try and get in by sea.

In the mist of seeing all the heartbreak for folks down there I
needed some time at the machine.
Background story is HERE but following the layout suggested  didn't work
for me so I changed it. After fiddling around this was the result 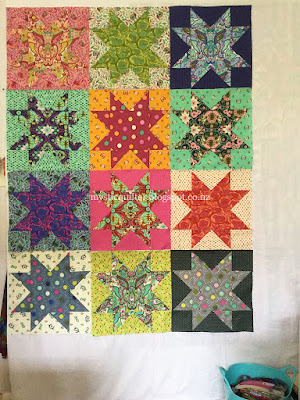 still  didn't look good so, not helped by being placed haphazardly on the flannel
which is covering my Gypsy Wife pinned underneath! 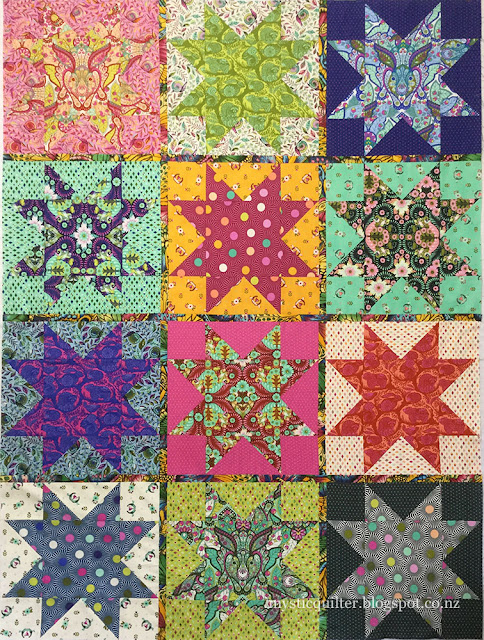 I decided to add a 3/4" sashing which I think unifies
all these blocks and gives a better look overall.
No borders but I'll use the same sashing fabric for the binding.
This can be used in Summer out on the bench seat in the
back garden.

Back in a couple of days hopefully feeling not so sad.

It is so sad to hear the news. Thank goodness for sewing at times like this. Your stars look wonderful. It makes me wonder if there'll a quilt drive for those who need them.

There's way too much sadness in the world right now. I'm finding solace in sewing, too.

My goodness Maureen...I am sorry...finally, I realize that we can control nothing...ugh...sew away, I certainly do xxoo

I just keep sewing through all the sadness doing creative work that will comfort someone's sadness. Your quilt is beautiful and I adore the 3/4" sashing. I am not sure I have the skill to do that straight, but I sure love it.

That bit of sashing is a game changer. Well done! I've been on the run and half a world away so not well informed, but hoping help arrives soon for those in need over there.

Mother natures certainly continues to show us who is boss. I love the added touch of sashing in your quilt.

Lovely added extra with that sashing! And yes, terribly sad news, and those aftershocks continue today.

It is very sad to hear about the earthquakes in New Zealand. I hope that they are able to help everyone in need as soon as possible.

I agree with Julie: nature is boss. I don't have a tv so haven't seen pictures of the devastation, but I listen to the radio and the reports are heartbreaking. People must be suffering terribly, it's just positive to hear that not too many people have been hurt. I was horrified by reports of tsunamis on top of the quakes and people taking refuge on higher ground. I'm hoping so much for you all that we don't see another quake like Christchurch in 2011. Thinking of you.

And I knew that quilt would be fabulous! The narrow sashing was a genius idea, perfect :) Take great care Maureen x

I get email reports of earthquakes with a magnitude of 6 or larger, and one of the first ones that hit you was an eye-opening 7.8. Which is huge! And the aftershocks have been large ones, too. How frightening, and devastating for everyone. Stay safe, and stitch away. Your sashing ties the blocks together very well!

I too get email reports on earthaquakes and immediately thought of you when I got the New Zealand reports. My heart goes out to those who are suffering. We talked about this earthquake in my science class, and the devastation that followed, but hearing from someone close to the quake makes it very real. Living in New Jersey I can't imagine a quake. When you have information about relief efforts, I would like to know since my class wanted to know what the children do when everything is gone.

So glad you are fine and safe from the earthquakes. Saw the news reports and video of the horror that occurred. It grabs you when you are close to such an event.
Your narrow sashing strikes the perfect chord for the stars. `Stitch on.

It's amazing what a small change like sashing can do. Good choice. And just a note on the bright side...at least Leila isn't "helping" you.

I knew when the first reports started coming in that this would be a bad earthquake. I'm hoping that most of the people are safe, but it's so hard to lose your home and town. What I know is that the good people of NZ will always take care of each other and step up to provide comfort, shelter, and hope.

The bright patterned sashing is very effective on this quilt. Adding those skinny pieces is quite a bit of work, but very worth it in this case!

praying for all in the earth quakes

I hope the tremors have stopped Maureen. Sending hugs to all of you.

I like this quilt. Something to brighten all the bad news.

Like others, I receive earthquake notices and was so concerned about this latest disaster. NZ barely recovered from the previous one. I'm glad you and your family are safe.
Lovely narrow binding. Keep it up.

I have been glued to the computer following events. Most of our family are around Christchurch and have only just got back to normal, so I am really feeling for everyone hit by this latest disaster. I'm glad you are safe. I like that little narrow sashing a lot; it unifies the blocks without being overpowering.

Another even that has rocked the whole country, even if all of us didn't feel it. I like the addition of the narrow sashing to your stars - you're right, it unifies the blocks. It will look lovely with a binding of the same.

Robby I can't reply in detail to you as you are a noreplycomment blogger. Perhaps you would like to sen me your email. Alternatively, hoping you see this note, you could have a look at www.jeanmckinstry.blogspot.co.nz who has a good post up today.

Oklahoma had a 5.3 earlier this month and that was scary enough. Can't imagine one of that magnitude. Hope things are slowly getting better. Love the stars, the narrow sashing really works well with all the blocks.