Blame it on the scissors and the poppies! 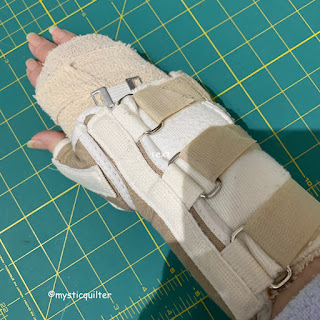 yes, a real bad case of tendonitis, the worst I have ever had!

Due to my deciding that I didn't want tulips in the centre of my
AHIQ String Tulip QAL I hunted for favourite fabrics and decided on
Poppy Garden  by
Philip Jacobs, a snippet below 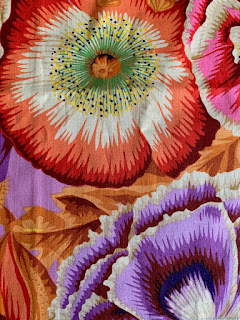 as you can see the frilled edges of the poppies are so pretty and
after deciding I should like a central collage within my string squares
I had a moment of inspiration, why not carefully cut
around a few individual flowers for the collage. Out came my very
special tiny, sharp scissors and I began and rather overestimated how
long cutting into those frills would take, the result you can see in the first
photo of this post!

Here is the posy before ironing and fusing down using Misty Fuse. 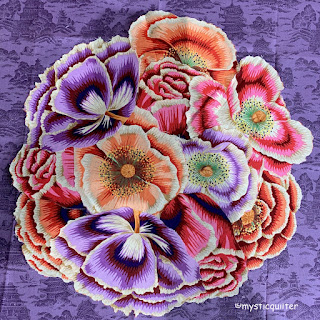 Just as I had envisaged - a posy of poppies
set into the surrounding string squares although the purple
colour is slightly off in the photo
above. 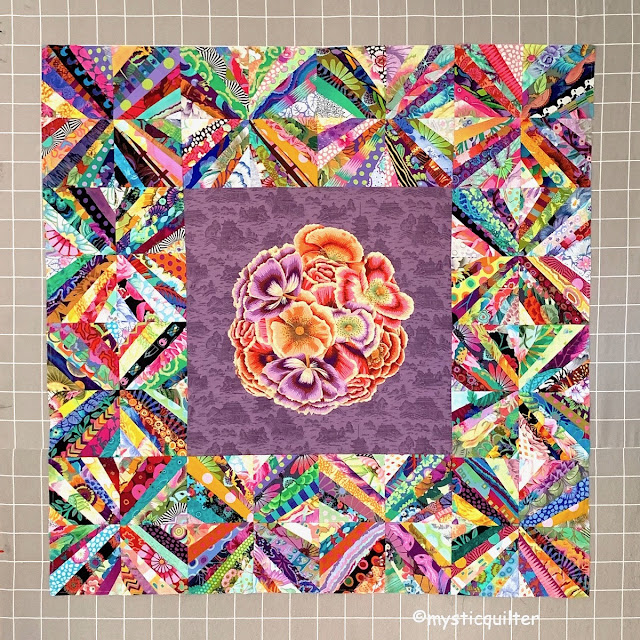 just a border needed now and if I ice my hand regularly I'm hoping I
can have that done in two or three days.
As I was finishing the posy I checked on the Caring Bridge site for
news of Debbie from Stitchin'Therapy and learned that she had passed away
just 10 hours earlier. I had followed her blog since 2013 and we had exchanged
many emails  during that time, she battled for the past few years with many health challenges
and with great courage, she will be sadly missed.
On that note here is a peaceful scene taken down at the beach yesterday 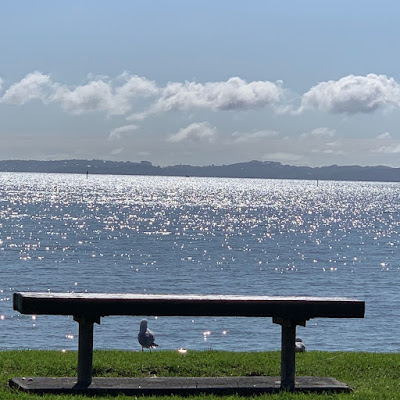 the sea just sparkled, it was beautiful and I think the seagull
under the bench was enjoying the view.
PS more words than I had thought!
Maureen

posted by Mystic Quilter at 4:56 PM

Your photo says it all!!! A little of everything in moderation, including food goodies and definitely fine snipping with tiny scissors. So sad to lose an online friend , lean on your memories. Down here, I am having another tread mill test next week, cancelled very early this Tuesday morning.Some angina has started again, the guys and gals in green attended at 1 a.m. and I had a day in ED last weekend.Love your flower fabric, I have not been doing much in the quilting line lately, one small block in the US tour, and trying to decide on fabrics for a colourwash wall hanging pattern from "cottonandbourbon" I do hope your hand and wrist heal, and the temptation to cut any more flowers is dealt with properly.XXX

Poor you! That will teach you to over ambitious with the scissors. However, the resulting posy in the centre of your strings is gorgeous. Keep on looking after your wrist. Lovely photo. NZ is calling to me!

Oh no--so sorry to SEE that, Maureen. Hard to deal with when our bodies respond by breaking down on us!! We feel betrayed somehow, don't we?
hope you heal quickly...

Your central posy is just beautiful --I really like it--nicely showcased by both the surround fabric and the string exploding blocks. Good work on this one...
Hugs and good thoughts for healing
Julierose

Tendonitis is not a good thing for sure. The posies are so much better than the tulips as shown which are too blocky for me. My tulips have been flattened and frozen by 5" of snow. If the snow would have just melted, I think they would have been ok, but the freezing temps did them in. They were all about to open- all 150 of them. Same day that Debbie died, mourning her loss.

Ah, Maureen, I'm so sorry that your fussy cutting efforts resulted in injuring your hand, but the result is spectacular. And your string blocks are so very vibrant. Hopefully rest will get you back to your machine. I also followed Debbie for many years and learned so much from her about watercolor quilts. She always responded promptly and thoroughly to questions. She had a true gift in making her quilts glow. She also never gave up when her ailments made quilting difficult. I will miss her very much.
Pat

This is where you need a studio assistant to do all of the tedious careful cutting...at your command. Wouldn't that be nice? The poppies are so pretty in the center.
Debbie was a good friend to so many of us. We shall certainly miss her and her wonderful quilts.

Noooo Maureen. That is not a pretty sight.! I am sorry. For art...look what we do. The quilt turned out beautifully...just perfect...Alas, your arm did not..Thinking of you xoxo

Your posy is gorgeous! I'm sorry that creating it had side effects, though. I hope you heal quickly!

Debbie's passing is so very sad. She was a vital personality in the quilting world, wasn't she? So kind and generous. I will miss her.

Oh, I feel your pain. The enforced rest should help. Your posies turned out really well. I, too made different tulips on mine.
I enjoyed Debbie's columns and her work. I'll miss her.

Owch! I'm sorry your poor hand is so unhappy, especially when you had come up with such a fantastic solution to the tulip question. When you are able to sew, your quilt is going to be just lovely.

Love your quilt Maureen, and especially like your centrepiece! Even though it doesn't seem like it now, but I think it was worth all the discomfort...dont you? :)

Fabulous design/improv! I hope you heal fast. My knee has been bothering me lately so I too have to take things easier.
Your work is beautiful, thanks for sharing.

I love your way of making the centrepiece, and it is really beautiful. I'm sorry to read of your resulting injury. I think we all know when to start, but are reluctant to finish. I know well the feeling of "nearly there...", inevitably followed by regret: in my case sore shoulders
and/or unpicking!
Best wishes for a speedy recovery.

Oof i feel your pain and hope you are recovering well. I love your centre medallion for the string quiltalong! A different idea and still a perfect fit!

Ouch looks painful, but that was a divine piece of fabric to spend some time with. The quilt is looking good.