How come it's December???

Can't believe we're almost at the end of 2022 already with far less achieved on the quilting side of things than I had anticipated!

My plan to take me to the end of this year is to be working on two quilts, this first one
is the one patch, now to be called Willy Nilly with thanks to Julie who made the comment that she liked that I had just picked up the squares 'willy nilly'

and the second is the Lego quilt, now to be named Mixed Bag as the strips were just pulled out of the bag  randomly - this was cropped, not very well, but all the blocks are now off the wall. Fifteen blocks finished and I'm thinking another 15 to give me 5 x 6, however at 50" x 60" it could be a little on the small size for a lap quilt. I see I made a start on this quilt in 2020 and just realised that it's looking quite dark, I think I photographed at the wrong time of the day.

My Slashed Squares top has been sent off for quilting, could be January before that's taken care of. 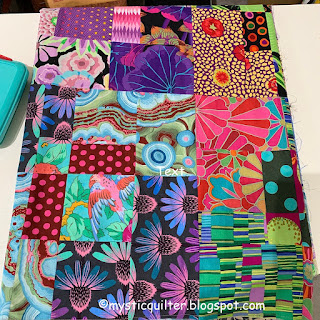 Next year I have a few projects in mind, one of them will include the Brandon Mably fabric below, in the store for basting pins but spotted this particular fabric on the KF racks, seems that it's his first designer fabric as the selvedge has it down as BM 001 - Casbah 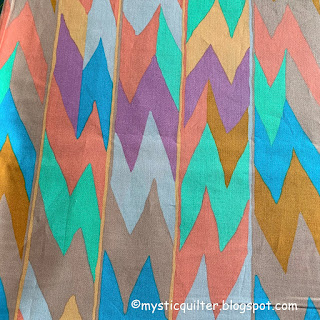 I scored three half metre pieces too, top two are Martha Negley and the bottom is a Philip Jacobs - Gloriana. 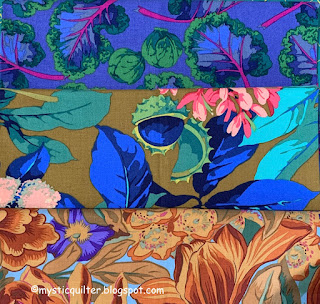 The garden is full of colour again after the constant rain reduced my rose blooms to wet, brown lumps but the first dahlia is out, I just love the colour in this one. 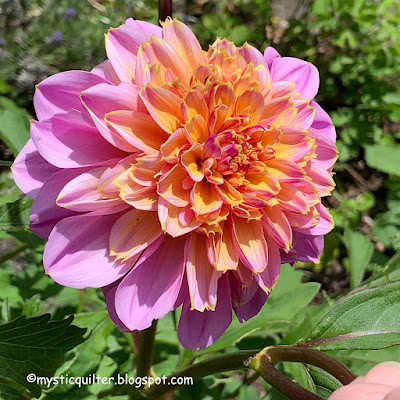 A colourful way to end the post, more flowers should be out when I post next time, also more quilting!

Have a happy week

posted by Mystic Quilter at 5:17 PM

Willy Nilly is beautiful, bright and the name fits perfectly.More fabric, I wouldn't be able to resist either. yes, December, it has all gone too fast sometimes, others I just wanted the year to end quicker.

You have some very bright and beautiful projects happening.

Your quilt color choices definitely reflect your garden flowers beautifully..
Nice that you have plans in place for 2023--I don't, so far for quilting; but I do want to get back to my journal making...hugs, Julierose

Willy Nilly is awesome - but!! Mixed bag.... now that one just sparks and sizzles and I just LOVE it!!! Have lots of fun with them!!!

The scrappy quilts give us fabric lovers so much to look at close up and they are just stunning at a distance. I love that blue Martha Negley print. I think I have a little of it.
Dahlias are so pretty but here we have to dig then up before the first freeze but I think you can leave them in the ground.

It's always a day brightener when those of you "Down Under" post photos of glorious blooms. Gives us hope up here where it's gloomy, damp and cold (and sometimes snowy).
I love both of these quilts with their riots of color.
Pat

Mixed Bag is such an awesome name for your lego project! And I love that my comment sparked a name for Willy Nilly. It is going to grow into a fabulous quilt top. Thank you for sharing your garden blooms - it is dull and dreary here with lots of khaki grass and drab vegetation in hibernation for winter.

Great quilt names Maureen! Yes, I've been less productive this year too, other things happening. Nice to see your new fabrics, do you shop locally?

All your quilts showcase the beautiful fabrics you use. Great ideas to use up some more of our scraps. And then I'm looking for some of these gorgeous prints!

I'm just so glad for you that you're able to quilt again! Love seeing the scrappy mix of delightful fabrics that you use.

Two lovely, scrappy quilts and both with fantastic names. It's good to know you are already planning for next year.

Your dahlia is fabulous!
And I think your 'Willy Nilly' design is beautiful, I'm cheered up, thank you!