End of an Era and quilt progress

Most of you will no doubt be aware that the 96yr old Queen Elizabeth ll died on September 8th at Balmoral in Scotland.  Being British born and bred and a royalist through and through this was the saddest news.

70 years ago a little 5yr old girl on a sunny day was standing, with other pupils from the small four classroom school, all waving Union Jack flags, waiting for the new Queen Elizabeth to pass by with her husband Prince Philip. She had ascending the throne just a few weeks before and was touring parts of the country, much as King Charles will be doing shortly.

After a long, long wait the cavalcade slowly approached and luckily the Queen was on our side of the
road, I can still see the scene so very clearly, she was wearing a stunning peacock green suit, I think silk, with matching hat, and had that wonderful smile for us all. She was crowned the year after and we were all glued to the television screen for a few hours. 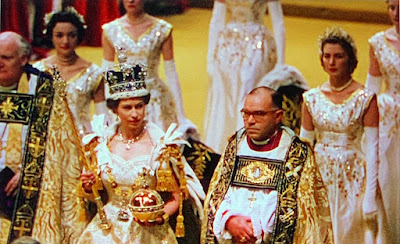 Her smile was always a delight to see, especially when wearing her beautiful brightly coloured outfits
with those stunning hats. 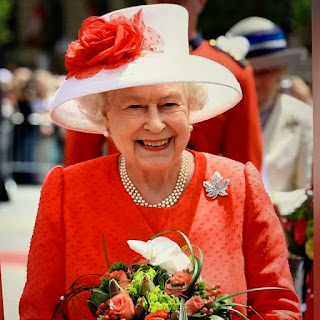 Sadly this is the scene as I write now, she lies in state with the Imperial State Crown, the Sceptre and the Orb also placed there, sadly the photo with all regalia seem to have gone awol. The Crown is much, much brighter than I could get on this photo. 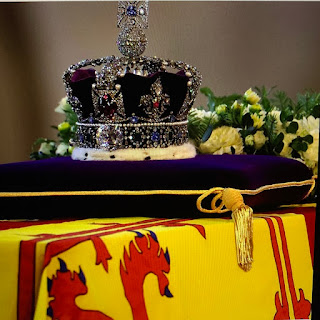 Now it is God Save The King.
OK, I will get onto quilting matters, I just had to get the above thoughts down on paper.
I haven't read blogs, not sent emails nor received them because my computer was not playing nicely, now fixed, thank goodness.
Progress has been made with the quilt for grandson Charlie, he likes bright and bold and that's going to be what he gets. Blocks on the wall, no placement order of course I just wanted to put them up there as I stitched to check on colours used. The last quilt I made for him he was 6 years old, quite detailed, with medallion style borders, diamonds and so on, I had bought dyed fabric for the backing which was extremely bright, swirly and a mix of colours. He told me a couple of years ago that he still used his quilt even though it was now too small for his bed size, the interesting part was that he has never had his quilt right side uppermost and always had the back showing as he preferred all the colour!! I intended all along for this new quilt to be scrappy and busy looking, no definite pattern to it, I think it will work. 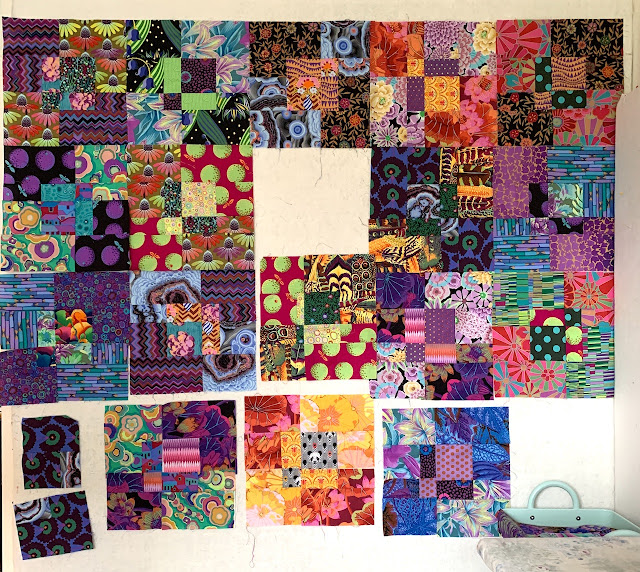 25 blocks in all are needed to make a 70" x 70" quilt, the design wall goes to the floor so plenty of room.
Still haven't been able to calibrate the colour settings on my screen due to the computer issues.
All for now, back to sewing all the pieces cut and ready to go through the machine. I can now read blogs again also!!
Maureen

My condolences on the passing of the Queen. It has been heartwarming to see the outpouring of love and respect from those attending the various ceremonies. While she always appeared dignified and gracious, I'm sure she was also strong-willed and very much in charge.
The quilt for your grandson is coming along and I'm sure he will enjoy all the bright colors and patterns.
Pat

I am also sending my condolences for the loss of the Queen to you; I was 9 when she ascended and so for most of my life she was the Queen...we shall see what the succession brings.
I am so happy to see that you are sewing once again and can read blogs...;))
I hope you continue to have good days hugs, Julierose

Maureen, the end of the royalty as we knew it, Charles will have a hard task ahead, The pomp, the training, the stoic faces, I did see one pall bearer have a tear slide down his face as they entered Westminster Abbey. Then George and Charlotte, sombre too. Love those bright fabrics, how are you managing to get them so high up? This will be a winner that, again, will be treasured and last a lifetime.

Thank you for sharing your stories/memories of the Queen - British or not her presence (and now absence) impacts all of us. Your colors are pure delight and how wonderful that you can read and blog again!

I sat up way too late last night. Also British born I love to see the pomp and ceremony.
That is going to be a very bright quilt.

Yes such a shock to wake up too, even though we all knew she had had some health issues recently. She will be so missed, am sure King Charles has been well briefed! I always loved her choices in coat colours, and they all suited her beautifully!

King Charles III was born on my 8th birthday so I followed the Royal family news in the Sunday papers all of these years. Queen Elizabeth was always someone special to me. She had to make many difficult decisions in those 70 years. I always loved seeing her wear bright colors.

I think Charlie's quilt is going to be great! So much intense color, so he should like it.

Elizabeth is the only British monarch I've known. How fortunate that you saw her in person.
Smart of you to make this quilt the way Charlie will like it. Such lovely, intense colors and prints. I can tell you made it.

Being American, and knowing no one with ties to England and royalty, I don't think I was even aware of the monarchy until Princess Diana attained popularity. It's definitely a cultural difference. But you have my deepest respect and sympathies. As for your new quilt... I love it! I can understand a grandson (teen?) asking for a brightly-colored quilt. Many young people ARE asking for them these days, and that's helping the modern quiltmaking movement. I think you'll have a winner with this one. Bigger is better too! Keep up the great work. He will love it!