Midnight At The Oasis

Nine patch style border this time but I began by making mine as if they were nine patch blocks rather than sewing the 1" squares in a row x 3 then sewing them all together. Only finished ten of these and was having doubts about how they would look on my quilt given the way I had changed some of the borders, also the colouring of mine was quite different to the original pattern

On the design wall I placed the tiny squares down one side of the quilt and the result was just too busy for me and did look quite out of place with the other borders - I did take a shot of this but must have deleted it - sorry - it would have been good to show just how it looked.

Finally I decided to just make nine patches, all with the same coloured centre square and set them diagonally - happy with this! 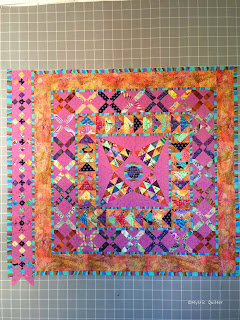 As you can see this is as far as I have gone, just one of those times when other things held up my progress plus I have not been feeling too well for a few days. However as we don't link up again until the 3rd January 2014  I  have three weeks to get this round finished up and hopefully the log cabin style final border and celebrate Christmas with the family!!

Have a happy quilty weekend
Maureen
posted by Mystic Quilter at 3:46 PM

Labels: Midnight At The Oasis

I love your border--it really looks great along with the whole center...hugs, Julierose

love this. Looking great. Hope you feel better soon and look forward at seeing your progress

Love it! Looks like you had planned it all along!

Wow, I love how the turquoise is coming out in the fabric between the borders. It looks like it's singing a duet with the pink.

I think the nine patches are perfect in the last border. Not too busy. Just the right touch. It is fun to watch your progress.
Hugs

Yes, I agree, I think you should proceed with the border, it just works!

I am really enjoying watching the progress on your MATO!

Really love how the orange sets it off!