If it's Tuesday then it's AHIQ

Pinching an idea from
quiltdivajulie
I had  a good rummage through quite a large red box
which lives under my cutting table, into this box
go blocks that for one reason or another didn't make the cut,
bits left over from previous projects and other odd pieces.

At the beginning of the year I started  making blocks for
Rainbow Scrap Challenge 2015
but the number of fabrics I had to put on my cutting table in order to have a good mix for
my chosen blocks
became just too time consuming so the blocks were consigned to "the box".

Here's one of the yellows below, I had two so 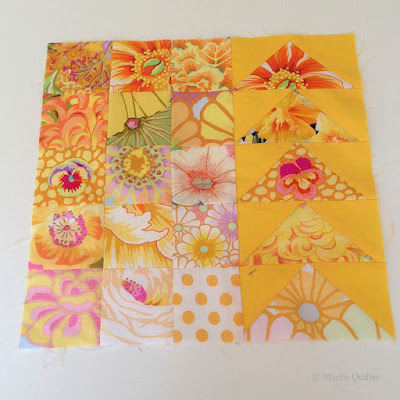 working on the brightest yellow one I unpicked the length of flying geese
and sliced it roughly in half lengthways, I then sliced into the three
rows of small squares, found a few strips in my string box and
played around 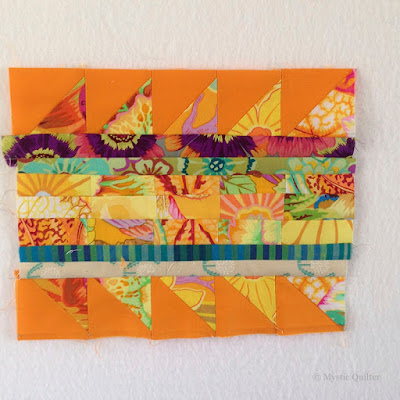 and ended up with this. I had rectangles in mind so trimmed this
up a bit and found more clean-up strips from my box. 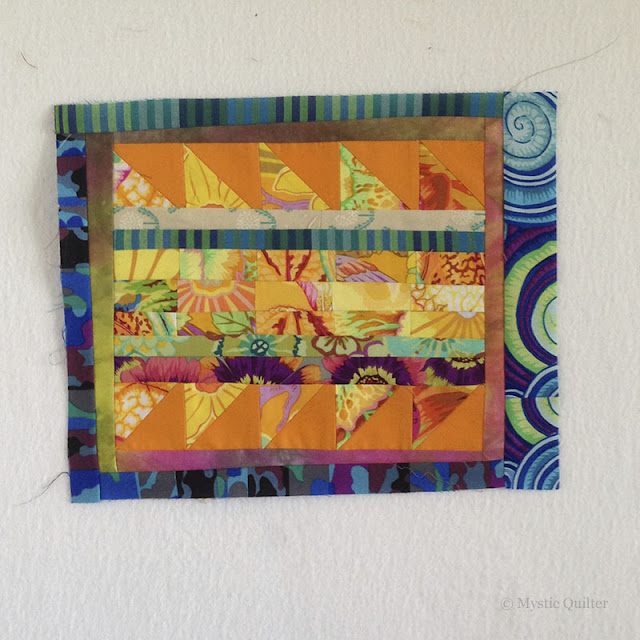 Now, I admit at this stage I am just playing, I really have no definite plan
as to where I'm going!!
I know that there would be a real jumble if I ended up with lots of popping bright colours
but I'll carry on making more units, some in a
similar style to the above using up all the other blocks, I have three blues and three pinks,
adding different styles and bringing subdued fabrics into
the mix to tone down the saturated colour - which I love!!!

We'll see where this takes me during the week, hopefully not
into a disaster zone!!

Thats a great block. I look forward to seeing what else you produce when you are messing around again

Well it's definitely not a disaster so far. I was thinking what a cheerful mug rug that would be.

Oh I don't think it will be a disaster zone at all. I admire your bravery at cutting up a block and trying new things. So far so good.

This looks like one of those puzzles, where you have to slide the 2nd,3rd,4th and so on rows, to match up to the top, and end up with people. I saw clown's hats there, but a lovely design. I am also using up scraps, and lots of smaller pieces in the latest challenge.

A riot of colour....have you run out of scraps yet?

Lovely start, the who knows where it goes is favorite part.

Those were lovely blocks when you started but I can see what you mean about taking so much fabric to make them. I love the way you're repurposing them. The new block is such fun. What will you do next?

This is a clever reworking of what were already lovely blocks (I am really drawn to yellow at the moment) and I really like the blue stripe in the mix. Play is good!

Those were a favorite block of mine when you were showing them earlier in the RSC. But now I can look forward to the magic you will use to transform them into something equally gorgeous.

I am so glad you pinched my idea and are having fun playing with the pieces from your "box" . . . stitch on!!!

You won't go wrong, you have a great instincts and a great sense of colour, enjoy the ride!